Asianera appears in the Ambiente blog

China was once the pacemaker for innovation in the worlds of art and design. The West then discovered the styles of the Far East, adapted them and made them its own. Chinese designers are now working on their own interpretation of their culture, and contemporary Chinese design is gaining a great deal of recognition – in Asia and internationally.

The fascination of Chinese design

For centuries, the artistry of China has inspired people far beyond the borders of the country. When European trade with China and East Asia increased in the 17th and 18th centuries, chinoiserie (from the French ‘chinois’) enjoyed great popularity. The new trend began with imported porcelain goods, whose imaginative aesthetic Europeans soon sought to copy. This gave rise to a style that moved away from the stiff opulence of the preceding Baroque era and soon found its way onto wallpaper, furniture, textiles and even into gardens. There was a strong fascination with China, particularly since very few Europeans would ever get to see this fairytale country in person. But they knew about the exquisite beauty and quality of its fine art, silk and lacquerware, even if their production techniques long remained a mystery. The style has maintained its popularity up to the present day. 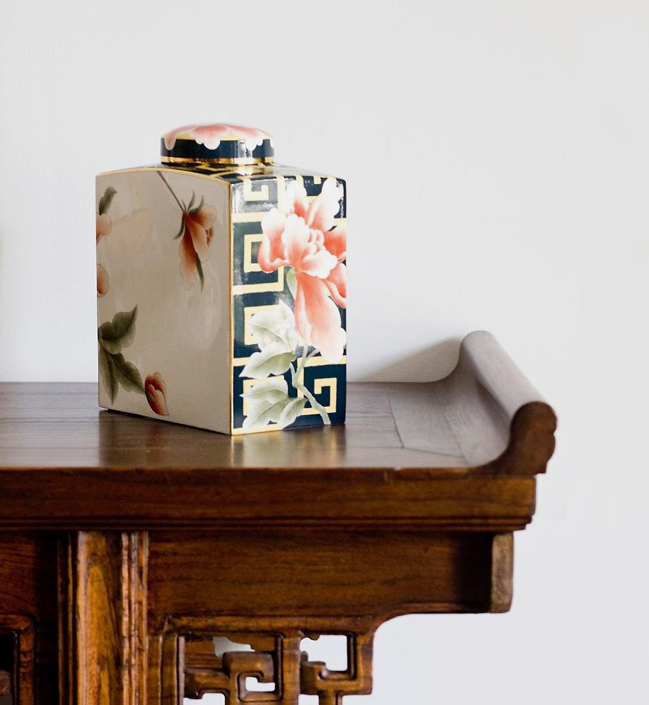 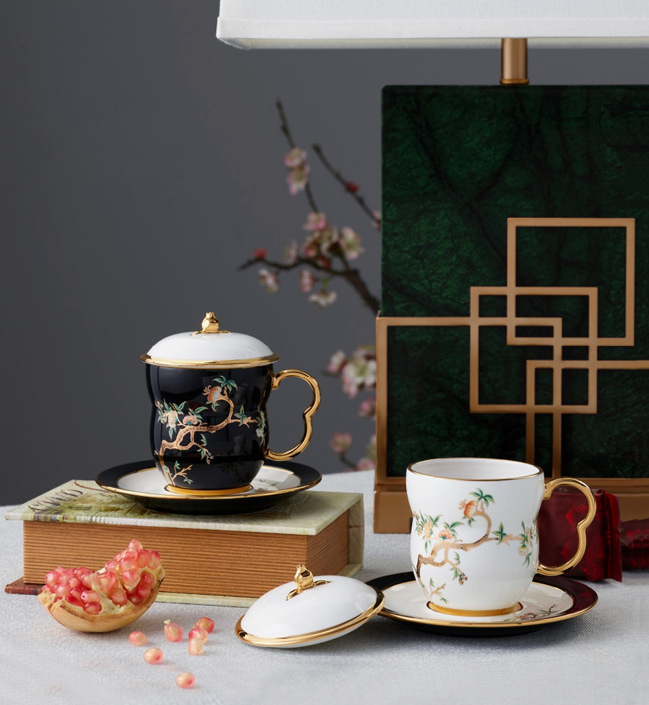 Contemporary Chinese design is far less baroque these days. Nevertheless, the sense of artful playfulness has remained. It manifests itself, for example, at Riedel in a handmade crystal decanter, and at Alessi in a folding tray designed by Chinese architect Jiankun Liu. Contemporary porcelain objects are also artistically designed, although adopting a more purist approach. They are therefore suitable for both the European and Asian markets. A modern interpretation of Chinese design can also be seen in the Canton Table restaurant in Shanghai, which has been furnished by the celebrated architect duo Neri & Hu and picks up on the rich Art Deco heritage of the world metropolis. Equally cosmopolitan is the cuisine of chef Eason Man who gives a contemporary interpretation to popular Cantonese dishes such as abalone, roast suckling pig and chicken baked in salt. 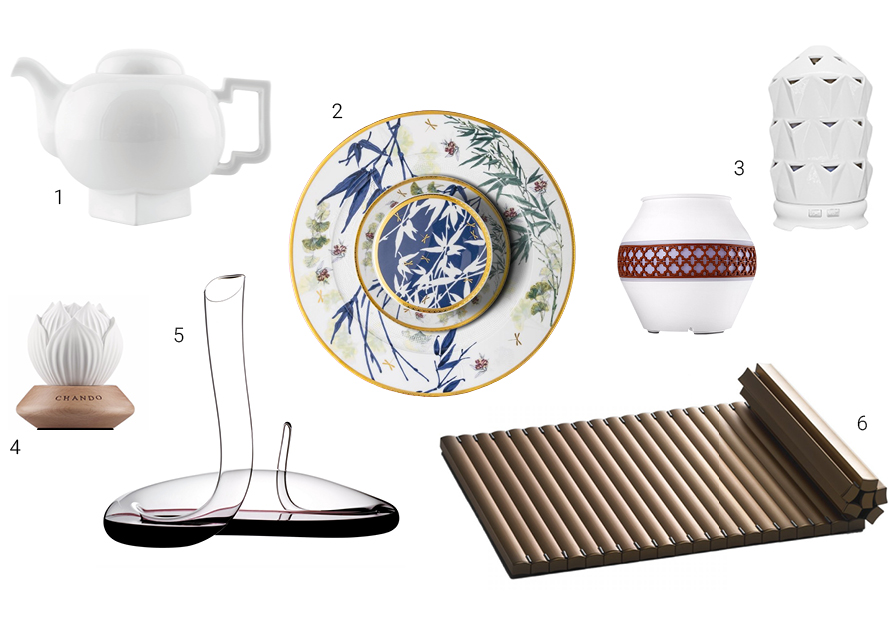 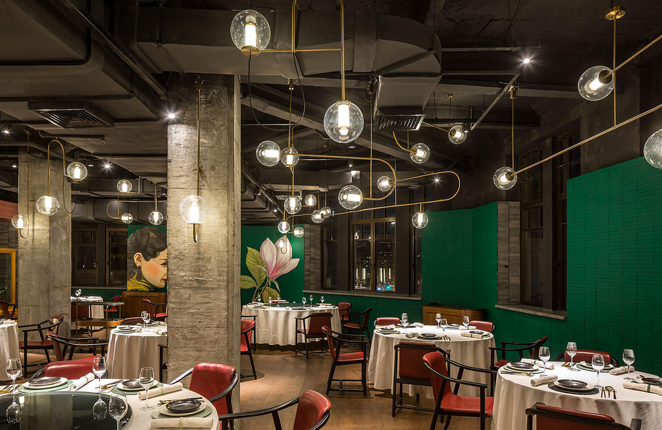 The grand architecture of the Song Dynasty, particularly Chinese pagodas, is one of the recurring motifs of classical Chinese design that is also often seen in contemporary Chinese design. An example of this is the Mandarin table lamp from Eichholtz with velvet shade and golden interior. Even without such obvious references as these, the codes of Chinese-inspired interiors are easy to decipher. They thrive on a fusion of black, glossy lacquer accented with gold and/or bold red. ‘Chinese lacquer’, which can be found for instance on the Lambert console table, has been used for many hundreds of years. In this technique, artisans cover the wood with layers of tree resin. The sap hardens into a hard-wearing coating that gives the furniture its characteristic sheen. 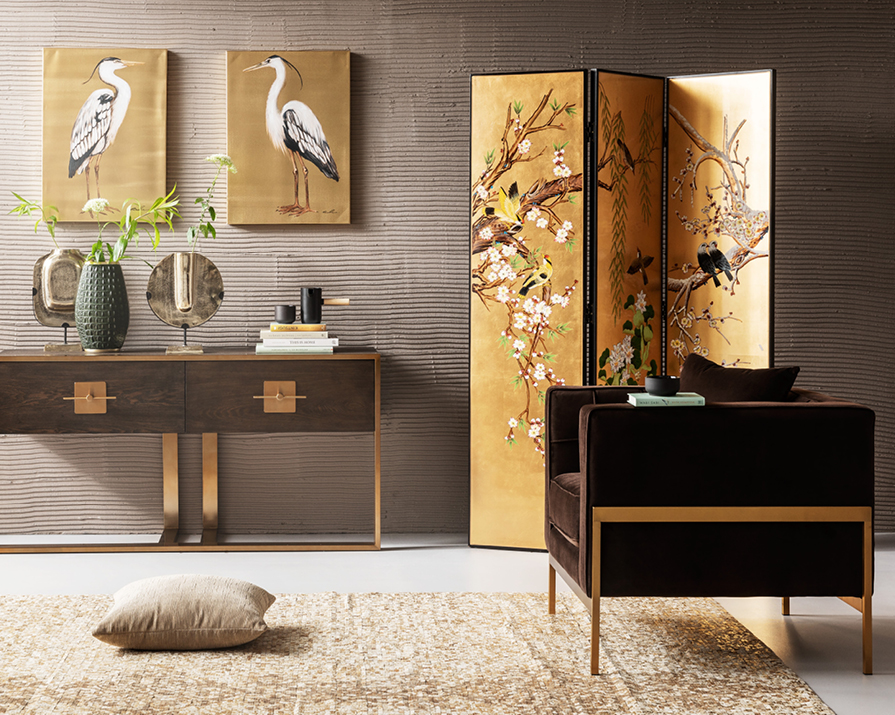 Classical Chinese interiors thrive on a colour palette often consisting of warm or neutral tones, with red and black present as recurring colours. Gold appears too – without ostentation and creating high-class accents. The screen by German manufacturer Kare, for instance, is made from lacquered solid birch and decorated with artistic motifs from nature. The earliest screens were made during the Han dynasty some 2,000 years ago, originally as a protection against draughts. Today, they not only bring order into the home, but also a touch of Far Eastern exoticism. Other elements of contemporary Chinese design include delicate latticework furniture, which has its origins in Chinese fretwork, as well as parasols, fans and decorative vases, which are almost as artistically crafted as they were in their heyday during the Ming dynasty. 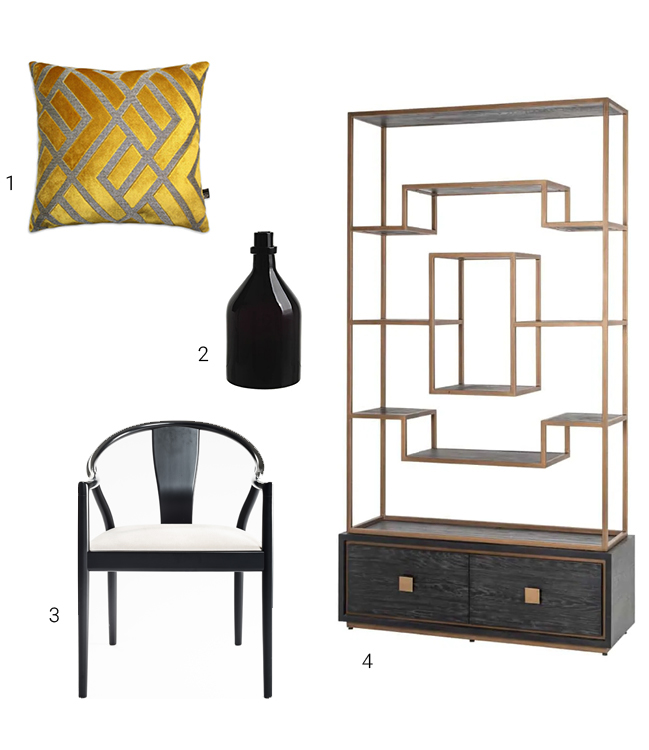 The influence of Chinese design is more far-reaching than often assumed. According to the designers at the Japanese brand Time & Style: “Chairs from the Ming dynasty have a charisma as a basic design that continues to the present day. Many contemporary chairs are influenced by designs from that period.” With their ‘Long’ chair the designers have created a piece of furniture with characteristic curves from the arms to the backrest that is influenced by antiquity but is also strongly reminiscent of Hans Wegner’s ‘Wishbone’ chair. From 1944 onwards, the Dane designed a series of chairs inspired by the Ming dynasty. His ‘Wishbone’ chair, which is informed by the style of these antique chairs, was to become Wegner’s most successful design and is still in production today. 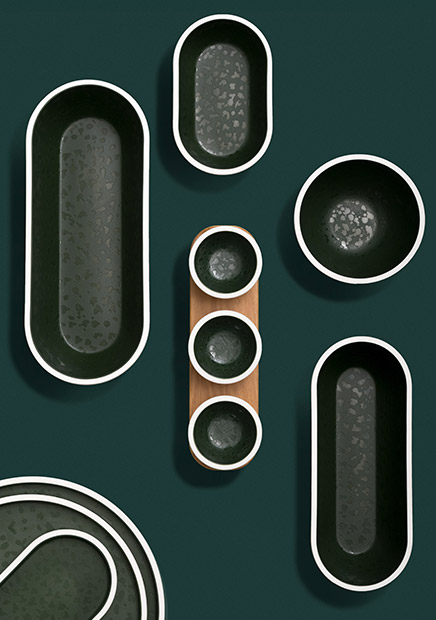 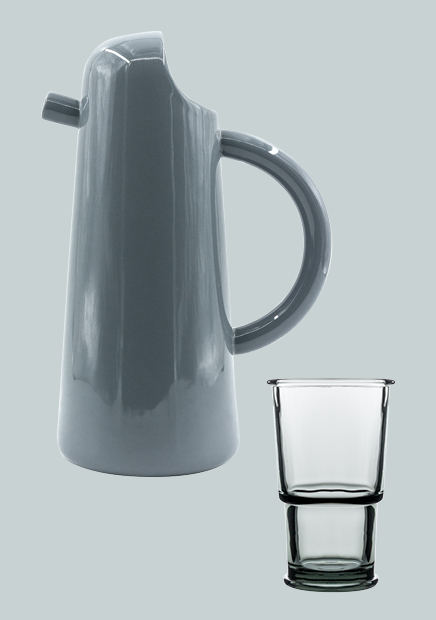 Contemporary Chinese design is a relatively young trend in which designers mix traditional styles with Western and Scandinavian touches. It is reflected not only in bowls from Zicco and carafes and drinking glasses from Hong Kong design studio Bomshbee, but also in locations such as the Alila Yangshuo – a former sugar factory that was transformed by Vector Architects. In their creations, the designers are combining history and cosmopolitanism – and forcing a reassessment of Chinese design, which has long been dominated by ‘copy factories’. China is no longer content to leave the interpretation of its own history to the West. 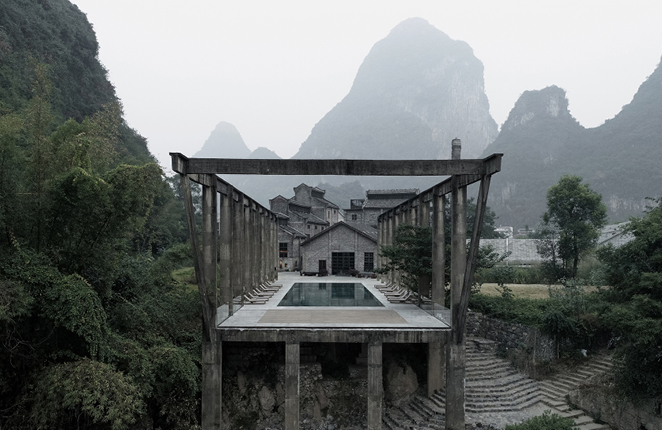 A strong team of designers at Studio MVW works on a playful mix of old Chinese forms and motifs with a modern, Western aesthetic. French-Chinese duo Xu Ming and Virginie Moriette create sculptural works of design art such as the “BlooMing” series, in which they deconstruct the classic Ming vase and convert it into a ceiling lamp.

The future of ‘Made in China’

Charlotte and Peter Fiell’s book Contemporary Chinese Furniture Design focuses on the work of today’s leading Chinese furniture designers and studios. The authors visited design studios, craft enterprises, factories and museums where old crafts are being revived. “What we discovered was an extraordinary pool of design talent that completely redefines the west’s concept of what Made in China really means,” the authors say. The design movement looks back to the country’s cultural roots and to the opulent legacy of the Song and Ming dynasties. It revives past techniques, materials and forms using modern techniques. 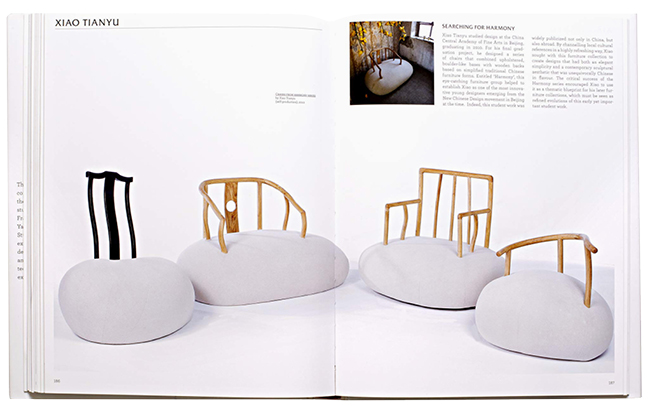 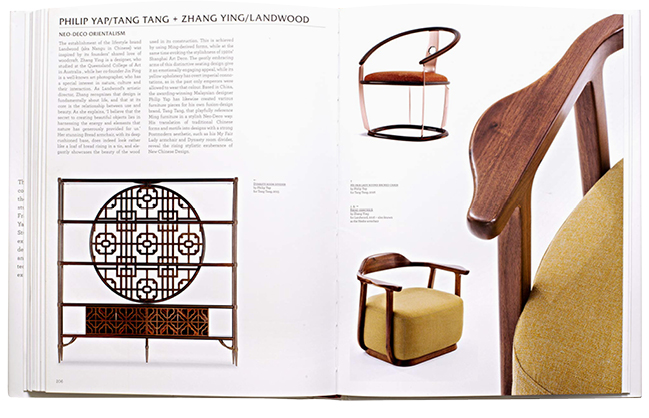 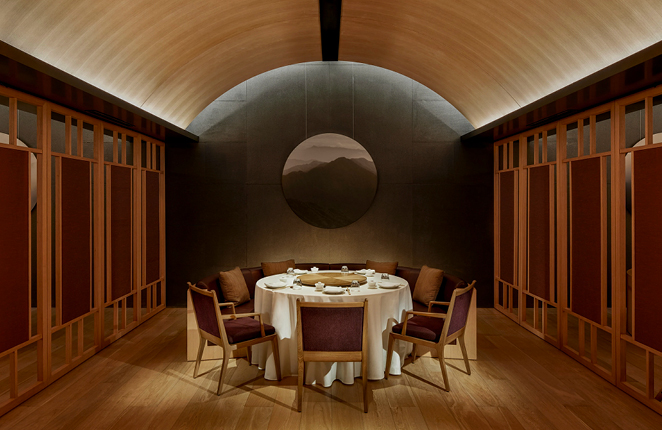 A good example of this – and one of the most sensational design projects in the country – is the recently openedAmanyangyun. Chinese billionaire Mr Dadong dismantled his home village, which was due to be flooded by a reservoir, brick by brick, beam by beam and tile by tile and rebuilt it as a hotel and resort near Shanghai, 700 kilometres away. The rebuilding project included a forest of 8,000 camphor trees, which today surrounds the hotel. He had the 26 villas built using granite, glass and bamboo, Chinese pine, elm, oak and Nanmu wood – a type of wood formerly reserved for emperors. They have been combined to create an image of tradition and modernity that demonstrates that the future of contemporary Chinese design will be written in China.